Showing posts from February, 2012
Show all

What happned? What will happen? 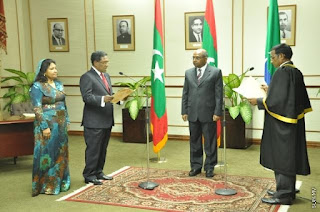 Today surely is a historical day for Maldives. After 22 days of protest against president Nasheed's regime, the regime has been brought down with the support of police and later on military in a matter of 7 hours. Why did this happen? This is what we need to look back. The regime of president Nasheed was toppled easily due to many reason. Lets start on. President Nasheed came to seat with the support of many political parties and majority of the voters in 2008 election. With that a 30 year regime of president Maumoon came to an end. President President Nasheed in his first address gave a wording that touched many hearts and souls. "Be humble on success and be patient on failure." The first problem was that not everyone in the government was ready to take that as a slogan. Many including some seniors were too keen to go on with retaliation, spread of hate against the previous government and its members. This specially was seen in the Parliament of the nation
Read more
More posts