Dear president, last night, China Maldives friendly bridge agreement was signed. Tonight the Visit Maldives Year 2016 festival is going on. Wish both the projects will end successfully and fruitful to the nation.

I am happy, that in a short period of time on 26th January 2016, we will be starting to use a new set of currency notes. Though not in circulation on 50th Independence Day celebration, I have no doubt it will be coming this time.

One thing worries me, and I would not run around the bush and try to make my point short and clear.
Dear President. A student may make a mistake in an exam. It’s ok. An employee may make an error in his tasks. It could be corrected. A Promise that you made in election campaign may not be fulfilled. It could be done next in next term. Yet, what on earth is a valid reason to have a typing error or a mistake in a new set of currency to be circulated in this nation on this very 21st century? 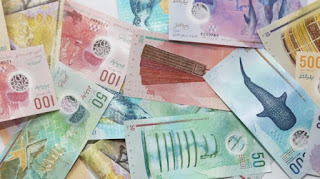 The typing error or the mistake in the new MVR500 note is expected to be unchanged despite it been known almost 3 months ahead of been sent to circulation.

Dear president. Had it been a mistake in a page of a dairy or a personal note, I have no reason whatsoever to be least disturbed or bothered. Yet, here I am talking about my nation! My language. And my currency. I am talking about a currency note for which so much was spent from our taxes. I am speaking for a note that my children and next generations will continue to use. I am talking as a son of this lovely nation. How or even Why on earth could we knowingly, send it to circulation?
Dear President. Tomorrow, when the next generation asks, am I going to say that it’s ok to have a mistake? Or am I supposed to confess that my then the president simply ignored a mistake and made a stupid decision? Am I supposed to assume that you are allowing a bad history to be written; to be noted as The President who brought about a currency with a mistake?

Well, it is true that I am not as experienced as you. I am just a little person whose voice you may never bother. Yet, I assure you, bringing this note into circulation without correction is wrong and very wrong.  This generation will be blamed for stupidity if this mistake is not corrected, and we should not be made fools by our president!!

Well, if the new MVR500 comes into operation without the mistake been corrected (even if at a high cost) do not blame us when our next generations mocks at you for allowing such a blunder in the history.

Dear President, one day, if my children or grandchildren ask me, “Will someone sane allow a currency with mistakes into circulation?” and I answer, “Never Ever”, don’t blame me.