Happy 2011
First of all, wish you all a very happy new year. I Hope this 2011 will be a better year for all of us in all the ways. I hope I was able to write some articles that you enjoyed in this year and hope I can write more in the year ahead.

HAPPY 100TH POST
Now, this post sure is an important milestone that I was able to reach. Reaching a 100 post, I feel is good level to reach. In the past two and half years as a blogger, I was able express my opinions in various different issues on different occasions. Mostly I tried to focus on political, economical, social and educational issues. I will not say I was able to write in every issue in the best interest of the society, but surely I tried on it.

It all began about a 30 months back when a close friend of mine introduced her blog to me and encouraged me to start with one of my own. Then came my own brother who showed his blog. That was the day the decision was made and the same day I put my 1st post on my blog. Today, I thank both of them, as it is because of them, that I reached this 100th post today.

Yes, surely one thing that always lead me to keep writing on my blog was the readers. For almost every single post I did, I used to get comments. The feedback I get from the readers when I talk or meet online keeps me on track and encourages me to write "one more post" always. Thank you all for reading my blog, and thank you for the feedback you provide.
Out of 99 articles I posted:
A Day in Addu City Hospital was the most commented.
Addu Education- Speaking the unspeakable was the article I like the most.
Adhaalath Party sponsored Islam was the article a lot of people questioned whether I made up a story.
So these three articles were the most noticeable 3 for me. I hope I could come up with more articles that readers will enjoy.

Happy Four Stars 2010
After I posted the 99th article, I asked several friends to give their ideas what I could include in the 100th post. This whole article is a mixture of some of those ideas. One idea was to chose the best politician 2010 in my view as I quiet often write on political issues. I found that interesting, and decided to come up with this FOUR STARS. Two from the government and two from opposition. Fare I guess.

These are four who I found played a big role in2010 and did come up with good results in what they tried for.

President Mohamed Nasheed has once again proved that he still is a start, not just the star of 2008 election. He has taken very unexpected and sometimes unbelievable decision that could have easily threatened his own government. The holding of the civil servants salary, the mass resignation of cabinet, the privatization of Male' International air port, the famous EYE camp, the "protection" to one leading opposition member Yameen were all decision where he proved he had the gut to do it. Maybe many people did not like it, yet he did all and did survive too. At least so for he is safe. 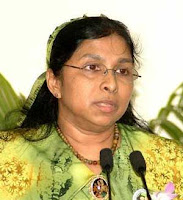 Dr. Amintha Jameel.How am I to describe? The quiet girl in government? Not a famous start for many people she maybe. However, she has proved herself as the star in government among ladies. The IGMH to Appolo international, the health corporations, the EYE camp, the resignation from cabinet, were the big issues that she faced. Yet she quietly did the job as she wanted. With all these issues provoking the opposition, she was once again able to come back to cabinet through a parliament where the same opposition was in majority. This makes her the star in government in this year.

Mr Umar Naseer. Some said he divorced his own party when he left IDP and asked the Elections Commission to remove IDP (the party he founded in 2005) from party registry. Yet, today, he has easily proved himself a star. Many calls him a political joker. Yet truth is he became one of the deputy leaders of the 2nd largest party in nation. Today he has challenged in court that Election Commission was wrong by not removing IDP from party registry. Yet, what makes him a start is he has challenged the leader of his present party DRP, gave a deaf ear to the dicipline committee, and with all those, he still have won the heart (for whatever reason) of Former president Maumoon in the whole process. Maybe he reached this far because he has backing og Maumoon, yet the point is he reached, thus he is a start of 2010 I will say.

Azima Shakoor. The law lady? It maybe true that she is practicing her profession. Yet, as a member of the opposition, it is also true that she has played a role in almost every time they won a goal. When some opposition members were given "protection. When cabinet went for the mass resignation, and in many such situation she stood up against the government actions or decision. As a member of opposition her win of the ministers approval from parliament sure was the best the opposition achieved in bringing government down to knees. These makes her the start among ladies in opposition.


At last, these are all what I felt and what i thought. What you feel or think maybe different. At the end of the day, if everyone thinks the same, I'd not be doing what I am doing now.

Finally, Thank you all for reading and commenting my blog. Hope you'd stay with me for another 100th post too :)