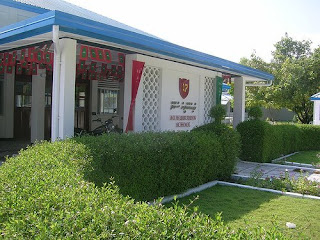 According to Jazeera news paper, next week the government is going to open the opportunity to begin an international school in Addu.

As someone who was borne and brought up in Addu, I am glade that at least something is done in our Atoll. However, I am more concerned that we are moving one step backwards by opening an International school in Addu, given the present situation. I am saying this not just to say something. I do have reasons to believe this.

Before I come up with my argument, let me give a brief idea about school system in Addu right now.

Firstly this international school in anyhow will be opened in Hithadhoo. There are 3 secondary schools in Hithadhoo. Two are government and one private school which is no more in operations.

Muhibbudin School is the longest serving secondary school in an atoll which has a student capacity of nearly 900 in this year. The previously know Southern Secondary School which held "The Model School" position also accommodates nearly 200 students for higher secondary education. The school management has already "informally" signalled that it will be Muhibbuddin that turns international and it will happen soon.

Islamiyya School is the present "baakee school" according to many Adduans because only the students who fails in Muhibbudin School entrance exam will be sent there. Here there are nearly 550 students.

Addu Comprehensive School that operated is now closed and the building is no more in use since last year.

Now, lets talk about the International school. Oh my God, for heaven sake, Dr. Musthofa, if your going to do anything good to Addu why not do one of these two.

1. Leave the idea of making Muhibbudin School as the international school. (though it is said that the school is not decided yet, believe me its a public secret) Use the land and building of Addu Comprehensive School for the international school. Come on!! This is an MDP government and we are talking about a school of the MDP member and its parliament member Mohamed Aslam.

a- Mix the students of Islamiyya and Muhibbuddin EQUALLY, rather than sending the ""CREAM" to Muhibbudin School as a principal once described.
b- Divide the two school on the basis of gender. A boys school and a girls school as in Male'
c- Dive the students of the basis of streams that they study. ie; A business stream school and a science stream school.

If the things go otherwise, of cause I cant stop, yet at least I will say "I don't like" just the way Dr. Musthofa said two long decades back when asked to become the headmaster of Seenu Atoll Education Center,SAEC.