DO And DON'T for Anni 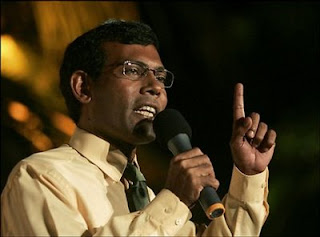 Today the fourth president of this country will be taking the office. All these days we had been struggling to get rid of a regime that held its power for three long decades. Now that a new president is coming...
I give a warm welcome to our new president Mr. Mohamed Nasheedh ...
well in advance. I thank the outgoing president for at least accepting the defeat and moving away smoothly. Yet, that is not all that I wont to say. Since Mr. Nasheedh is going to be leading the nation form tomorrow onwards I better talk of him rather than wasting my time talking about the "history." I'd put it as a DO and DON'T

1. Do fulfill your promise to rule on us with honesty, dignity and love.

2. Do bring the necessary changes to your cabinet and show us the "Quality Cabinet" (not the present party interest cabinet) that you promised.

3. Do try to make the Maldives Police Service a part of the Civil Services.

4. Do bring the mid term election as you promised.

5. Do privatize the government media and government businesses as soon as possible.

6. Do give a high priority to education system reforms and change the schools to single session.

7. Do have a plan of sending Maldivians to more authentic places like Saudi Arabia for Religious education.

8. Do make Theemuge the head office of the Maldives University as you promised.

9. Do implement a real and meaningful tax system as early as possible.

10. Do make the posts of Island Chief and Atoll Chief as elected posts


1. Don't keep any selected members in the parliament as it is against the democracy even if done by you.

2.Don't be a president who tries to do everything in a way that goes exactly opposite of what DRP do as earlier done in presidential/parliamentary vote.

3. Don't hesitate to make the decision of changing your cabinet to a more productive one.

4. Don't bow down in front of money or the wealthy people to forget the poor who are in need.

5. Don't expect the people to any longer stay quietly if your promises fail.

6. Don't stay long without giving a reasonable salary increment to the civil servants, yet Don't increase the salary of teachers as promised by Mr. Maumoon dating from August 2008 which will be an unequal deal on others of civil services.

7. Don't suppress the Sheiks in the country and don't give the "government sponsored Kuthubaa" for the Friday prayers.

8. Don't repeat the same mistake of dealing with people outside as "bai kulhandu madhu" people.

9. Don't use try to cheat the people as done before by changing the "name boards" of schools to colleges and health posts to medical colleges. (consider quality than quantity)

10. Don't be a man with a thousand faces to tell something different every other day.


These are something that I feel are very important.